Country music megastar Tim McGraw comes to Choctaw Grand Theater on Saturday 4th December 2021 as part of his previously postponed Here On Earth Tour! The chart-topping album was released in 2020 and launched the hit singles "I Called Mama," "Neon Church," and "Thought About You"! This year also saw the release of the Ultimate Edition, which has duets with Florida Georgia Line's Tyler Hubbard and also his wife and long-time collaborator Faith Hill! Fans know that McGraw's concerts are always high-production, larger-than-life events and this show will be no different! 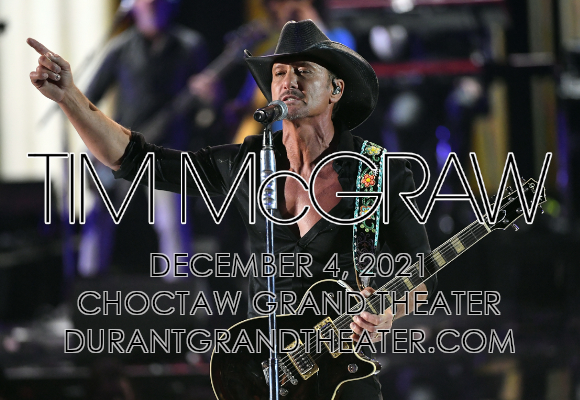 Singer, actor, guitarist, and record producer Tim McGraw is one of the biggest names in country music, with a hugely successful career that has seen him 10 albums that have reached number one on the Billboard Top Country Albums chart since his debut in 1993. His 1994 follow-up Not a Moment Too Soon was the best-selling country album of that year and put him on the map as a breakthrough star. From 16 albums to date, McGraw has had 65 singles, 25 of which have reached number one on the Hot Country Songs or Country Airplay charts. Three of his number one singles –  "It's Your Love", "Just to See You Smile", and "Live Like You Were Dying" – were respectively the top country songs of 1997, 1998, and 2004. A highly-awarded artist, he has won three Grammy Awards, 14 Academy of Country Music awards, 11 Country Music Association (CMA) awards, 10 American Music Awards, and three People's Choice Awards. The Soul to Soul II, which he embarked upon with his wife and fellow country artist Faith Hill, is one of the highest-grossing tours in country music history, and one of the top five among all genres of music. McGraw is one of the best-selling artists of all time, having sold more than 80 million records worldwide.