If you can't fight the feeling that you need some classic rock in your life, you're in luck – REO Speedwagon comes to Choctaw Grand Theater on Saturday 15th June 2019! The world-famous kings of the airwaves will be bringing their fan-favorite-filled set to the stage, busting out hits like "Keep On Loving You", "Take It on the Run" and many more! These veteran crowd-pleasers sure know how to get the audience rocking! 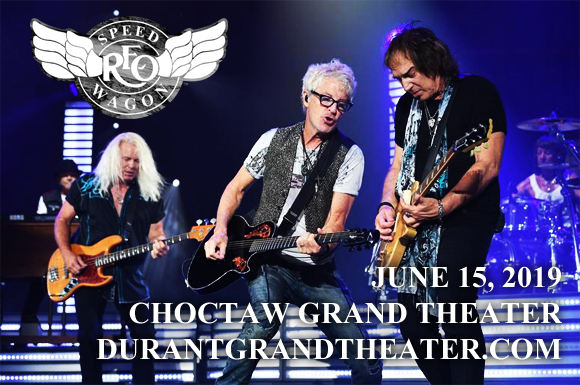 American rock band REO Speedwagon was formed in Champaign, Illinois in 1967, making its debut in 1971 with an eponymous album, released on Epic Records. The band enjoyed moderate success throughout the 1970s, building an eager fan base with the release of several hit albums, including the platinum-certified Live: You Get What You Pay For (1977) and the double-platinum-selling You Can Tune a Piano but You Can't Tuna Fish (1978). However, it was 1980s pop-oriented Hi Fidelity that served as the band's mainstream breakthrough, launching four US Top 40 hits and selling over 10 million copies. Having charted 13 Top 40 hits, including the number-one hit singles "Keep On Loving You", "Take It on the Run", and "Can't Fight This Feeling", and over 40 million records sold to date, REO Speedwagon continues to be a radio staple and a prominent live touring act.