With a brand new album rumored to be on its way, best-selling band Nickelback are headed to Choctaw Grand Theater on Saturday 17th August 2019 on their extended Feed the Machine Tour! The Canadian rockers will be performing tracks from their 2017 album of the same name, as well as exciting new material that marks the next chapter in their career! Tickets available now! 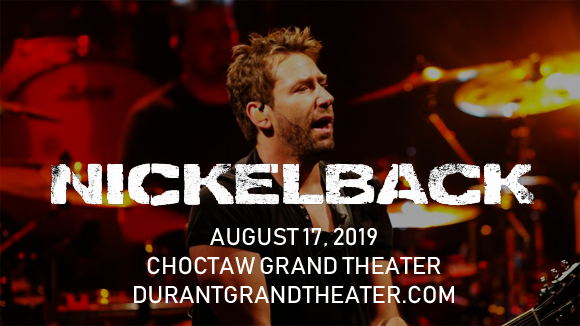 Canadian rock band Nickelback formed in Alberta, Canada in 1995. The group made its debut the following year with the seven-track EP, Hesher, but it was their 2001 album Silver Side Up that brought the group international fame. The album's lead single, "How You Remind Me," has since been ranked by Billboard as the best-selling rock song of the 2000s, as well as the fourth best-selling song of that decade overall. The album was certified eight-times platinum in Canada, six-times platinum in the US, and triple platinum in the UK, and launched two more singles: "Too Bad", and "Never Again," which both hit number one on the Billboard Mainstream Rock Chart. To date, Nickelback has released nine studio albums, with many of them reaching similar heights to Silver Side Up. The band has sold over 50 million albums worldwide to date, making them one of the most commercially successful Canadian bands of all time. They have been ranked as the second best-selling foreign act in the U.S. of the 2000s (behind The Beatles) and the eleventh best-selling music act of the decade overall. Nickelback's tenth studio album is slated for release this year.