Are you ready, Aldean Army? Country superstar Jason Aldean comes to Choctaw Grand Theater on Saturday 25th May 2019, bringing you his hot new tour, featuring new hits and fan favorites, plus high-octane production that will blow your mind! Never the shy and retiring type, Aldean brings his all to the stage, creating an electrifying show and making memories that will last a lifetime! 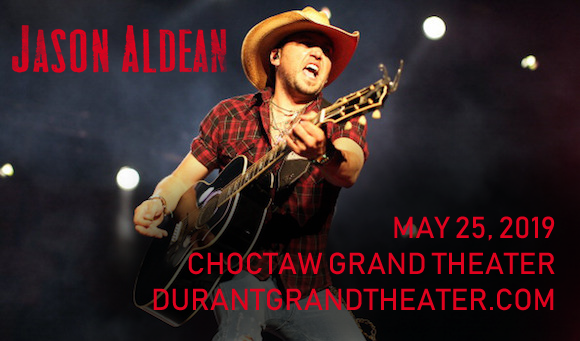 Signed to Broken Bow Records in 2005, American country music artist Jason Aldean released his self-titled debut album later that year to instant success. The album was eventually certified platinum by the RIAA and launched three Top Ten singles, including his first number one single, “Why”. Aldean has released three platinum-selling albums to date, as well as the double-platinum certified album Night Train (2012) and his 2010 quadruple-platinum-selling album My Kinda Party. To date, Aldean has chart twenty seven Top Ten singles on the Hot Country Songs or Country Airplay charts, including nineteen number-ones. His most recent release is the 2018 number-one album Rearview Town.