Foreigner are not only one of the best-selling bands of all time, but they're also one of the hardest working, and they're hitting the road once more for a spring tour, coming to Choctaw Grand Theater on Saturday 20th April 2019! Following a succession of successful reunions since 2017, the iconic band, whose career has spanned over four decades, still remain a powerful presence on the live circuit, thrilling fans with hits like “Cold As Ice”, “Waiting For a Girl Like You” and “I Want To Know What Love Is”! 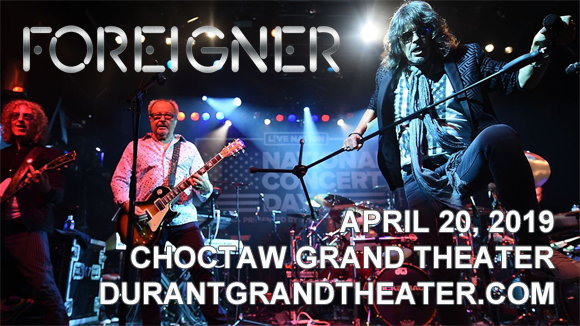 Formed in New York City in 1976 by Englishmen Mick Jones (former Spooky Tooth guitarist) and Ian McDonald (former King Crimson keyboard player) and American vocalsit Lou Gramm, Foreigner are one of the world's best-selling bands of all time. The group's self-titled 1977 debut album brought instant success for the band with the hit singles "Feels Like the First Time", "Cold as Ice" and "Long, Long Way from Home", and was eventually certified five-times platinum in the US. Their 1978 follow-up, Double Vision, peaked at number 3 on the Billboard 200, also launching several hit singles, and was certified seven-times platinum. The group's biggest hit, 1985's "I Want to Know What Love Is", topped the charts in the US, UK, Australia, Norway, Sweden and more, and continues to be a radio hit, charting in the top 25 of the Billboard Hot Adult Contemporary Recurrents chart in 2000, 2001, and 2002. To date, the band has released more than 10 multi-platinum records (with six consecutive multi-platinum albums released between 1977-1984) and 16 top 30 hits. They have sold more than 80 million records worldwide in their four decade career, including 37.5 million records in the US.