One of the biggest stars in musical history is coming to the Choctaw Grand Theater!! Ladies and gentlemen, its none other than the one and only BRYAN ADAMS, on tour in support of his new album “Get Up”. If you're a fan of Bryan Adams then get your tickets fast – they’re going to sell out VERY quickly! – and get down on Friday 15th September 2017. It’s going to be a phenomenal night! 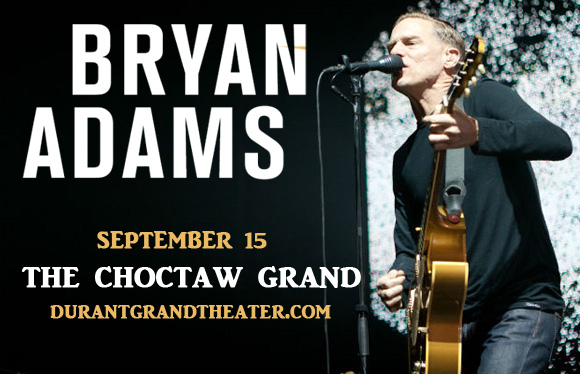 Catching the public’s attention with his 1983 album “Cuts Like a Knife”, Bryan Adams went on to achieve global stardom with his album “Reckless,” released in 1984, and saw some of his best loved songs such as "Run to You" and "Summer of ’69". It would seem impossible that he could surpass that but in 1991, he did, with the album” Waking Up the Neighbours”. The single ”(Everything I Do) I Do It for You" shot straight to number 1 in multiple countries, spending 16 weeks back to back at number 1 in the UK, setting a brand new record!! The singles "Heaven", "All for Love" and "Have You Ever Really Loved a Woman?” on the other hand, were all top number one hits in the United States.

Bryan Adams has achieved an inexhaustible list of awards and nominations for his contributions to music, including 56 nominations for Juno awards of which a staggering 20 were won, and 15 Grammy Award nominations! In addition, he has been nominated no less than five times for Golden Globe Awards, and three times for Academy Awards, specifically for his work in music for films. The list goes on and on!!

Do not miss your chance to see this incredible musician live – get your tickets to see Bryan Adams TODAY!!