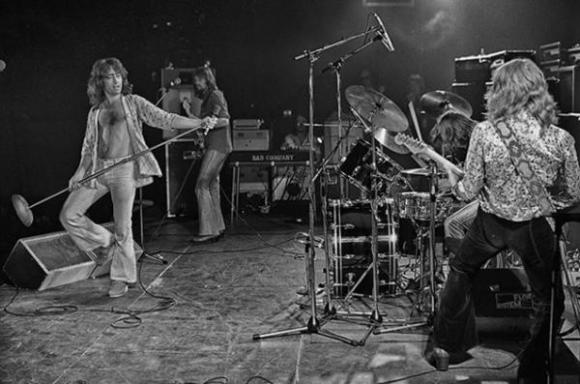 A hard rock supergroup formed in Westminster, England in 1973, Bad Company originally consisted of former Free band members Paul Rodgers (vocals) and Simon Kirke (drums), as well as Mott the Hoople guitarist Mick Ralphs and King Crimson bassist Boz Burrell, and was managed by Led Zeppelin manager Peter Grant until 1982. Throughout the 1970s, the group were a mainstream hit, finding success with their first three albums Bad Company (1974), Straight Shooter (1975), and Run With the Pack (1976), which all reached the top five in the album charts in both the UK and US. They also enjoyed chart success with the singles "Bad Company", "Can't Get Enough", "Good Lovin' Gone Bad", and "Feel Like Makin' Love", which remain staples of classic rock radio today. Their self-titled debut album peaked at number one on the Billboard 200 in the US, and number 3 in the UK Albums Chart, spending 25 weeks in the UK charts, and was certified five-times platinum in the US. The group has had a variety of personnel changes over the years, and has the current line-up of Rodgers, Kirke, Todd Ronning on bass and Howard Leese on lead guitar. The group spent summer of 2018 touring with Lynyrd Skynyrd for Skynyrd's The Last of the Street Survivors Farewell Tour, and frontman Paul Rogers recently finished a stint alongside Jeff Beck and Ann Wilson of Heart on the Stars Align Tour. Now the unstoppable classic rock supergroup is on the road again, ready to bring their unparalleled talent to the stage once more and prove that in 45 years in the industry, nobody does it better.