The trio show, Roots and Boots: Sammy Kershaw, Collin Raye & Aaron Tippin comes to Choctaw Grand Theater on Saturday, February 25th, 2023. Three of the best voices to define the country and western music of the 60s 70s and 80s, Aaron Tippin, Collin Raye, and Sammy Kershaw, join forces to present an evening filled with stories and songs as they get back to the roots of their music. Together, an impressive list of 70 albums, released by these three vocalists numbers have been included in the top 40 country and western album sales list. 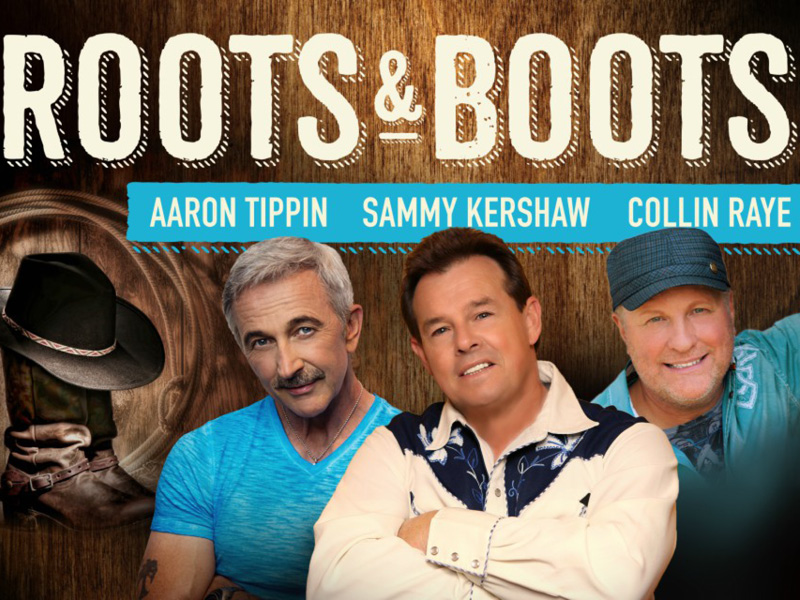 The trio of country and western singer-songwriters, Sammy Kershaw, Collin Raye and Aron Tippen, have been described as the best voices to represent the Country and Western balladeering music of the 1960s, the 70s through the 80s, and into the 90s.

Sammy Kershaw, an American singer-songwriter, has seen some of his album sales break into the Platinum category.

The second in our trio of western balladeers, is Aaron Tippin, is known for his unceasing crusade for the hard-working man and woman, ever since he began his country and western career. Aaron’s musical passion, is his honest and direct lyrics in his writing, and his impassioned voice have built him a devoted following.

The same passionate expression can also be said about Part three of the trio, Collin Raye. Having been forced to leave school and work for a living to support himself and his family at age 11, his country and western ballads, his electrifying performances and deep throated voice have been instrumental in cementing him as one of the greats. An American singer-songwriter, known for his fight for social injustices, the stigma against recovering alcoholism, the bane of child abuse. He has produced a very powerful ballad that poses the frightening question about how Jesus Christ would be treated if he returned today.