Country music superstar Keith Urban comes to Choctaw Grand Theater on Friday 18th October 2019 on his extended Graffiti U World Tour! Having already performed the show for a whopping 70 dates last year, Urban has kicked things up a notch, and fans can guarantee they'll be in for a wild ride! 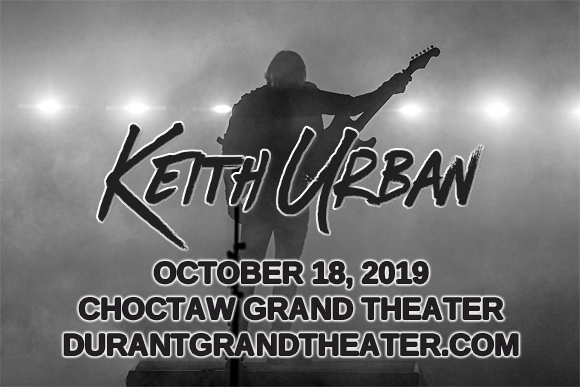 One of the most famous names in modern country music, singer, songwriter and producer Keith Urban began his music career in 1991. Urban's career began in Australia in 1991, when he released his self-titled debut album, which charted four hit singles. On the strength of his success, Urban moved to the US, where he found work as a session guitarist and formed the country music trio The Ranch, who released one studio album with Capitol Nashville before disbanding in 1998. The following year, Urban continued his pursuit of a solo career, releasing a second self-titled album, which went platinum in the US, and charted his first number one on the Hot Country Songs chart, “But For the Grace of God”. Throughout his career, Urban has charted thirty seven singles on the US Hot Country Songs chart, including eighteen number one singles. Urban has received many awards throughout his career, including four Grammy Awards. Be Here (2004), his highest-selling record, has been certified four-times platinum.