Legendary country performer Hank Williams Jr. comes to Choctaw Grand Theater on Saturday 22nd June 2019! Bocephus will be performing a carefully curated set-list of his trailblazing and iconic hits, singing country music for the everyman and bringing a taste of true America to the stage, so swig some whiskey and get ready to sing along! Tickets available now! 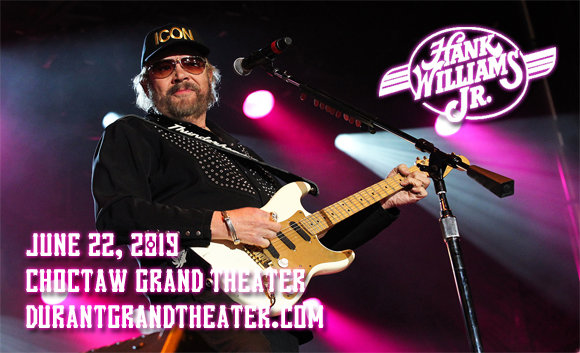 Son of the late, legendary country singer Hank Williams, Hank Williams Jr started his music career following in his father's footsteps. His debut recording was a 1964 cover of his father's classic hit "Long Gone Lonesome Blues", and that same year he also contributed the singing voice of his father (played by George Hamilton) to the film "Long Gone Lonesome Blues". During the late 1960s and early 1970s, Williams made his living impersonating his father and had several hit singles, before becoming disillusioned with his career. A near-death experience in a mountain-climbing accident in 1975 inspired Williams to take his career into his own hands, and in the 1980s he made his return to the music scene with his now-signature blend of country, rock, and blues. In the 13 years between 1979 and 1992, Williams released 21 albums, 18 studio & 3 compilations that were all certified a minimum of gold by the RIAA, and between 1979 and 1990, he charted 30 Top Ten singles on the Billboard Country charts, including eight Number Ones. In 1982 alone, Williams had nine studio albums simultaneously on the Billboard Top Country Albums chart, of which none were greatest hits or live albums. He continues to tour and record, and his last album was 2016's It's About Time.