Have you heard of Southern Momma? If not, you’re missing out. The hilarious Darren Knight, hailed as the next Jeff Foxworthy, is bringing his brilliant brand of redneck comedy to the Choctaw Grand Theater on Saturday 21st October 2017. Hit the “Buy Tickets,” button above to snag your seats for what promises to be a fantastic sellout show! 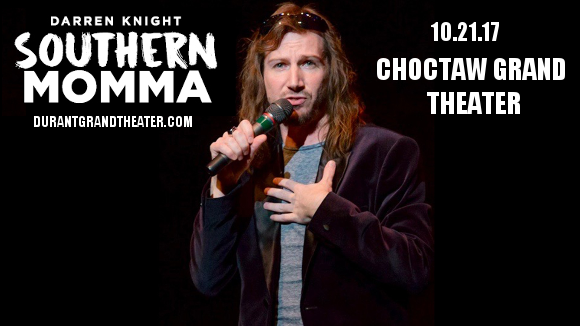 With his “Southern Momma,” persona, Darren Knight, from Mumford, Alabama, created an instantly familiar character. With his YouTube clips, featuring Southern Momma tackling a variety of day-today scenarios, including discussing Pokemon Go with her kids or escorting them to church, Darren Knight went viral on YouTube. Since then, he’s gone over to sell out more than 100 shows in just one year!!

Don’t miss your chance to see this rising star of Southern comedy – book your seats at Darren Knight’s show TODAY!!