It's time for something truly special as the greatest R&B group of all time, Boyz II Men, perform at Choctaw Grand Theater on Saturday 28th September 2019! The chart-topping, Grammy Award-winning group will be performing hits from their glittering three-decade career, getting you weak at the knees with their smooth grooves and nostalgia-drenched classics! As incredible as ever, expect out-of-this-wrold performances from one of the biggest bands of the 1990s! 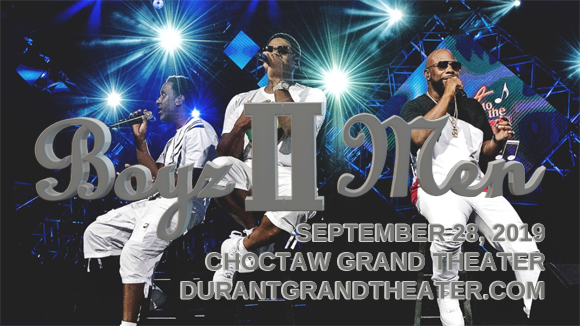 Internationally successful R&B quartet Boyz II Men found fame in the 1990s with their chart-topping smooth grooves. The group found instant success with its debut album Cooleyhighharmony (1990), which went on to sell nine million copies and won the Grammy Award for Best R&B Performance by a Duo or Group with Vocals at the 1992 Grammy Awards. Best known for the hits "Motownphilly", "It’s So Hard to Say Goodbye To Yesterday" and the record-breaking number-ones "End of the Road", "I'll Make Love to You" and "One Sweet Day" (ft Mariah Carey), the group has been recognized by Billboard magazine as the biggest boy band during the period of 1987 to 2012. The band ranks fourth behind Elvis Presley, The Beatles, and Mariah Carey as spending the most time at number-one on the Billboard Hot 100 ( with 50 consecutive weeks) in the history of the chart, and they became the third artists ever (after The Beatles and Presley) to replace themselves at the number-one spot on the chart. The band's most well-known line-up consists of Michael McCary, Nathan Morris, Wanya Morris, and Shawn Stockman, but McCary departed the band in 2013 due to a health condition. Their most recent album is 2017's Under the Streetlight.