One of the top selling and most prolific and widely respected artists of all time is coming to the Choctaw Grand Theater!! Yes, none other than Barry Manilow will be performing live as part of his 3-city concert residency in New York, Chicago and Los Angeles. The concerts will feature all his greatest hits, as well as material from his new album “This Is My Town: Songs Of New York,” set for release in late April. Catch all of this and more on Friday 12th May 2017! Tickets are on sale NOW! But be fast to grab them as this show WILL sell out! 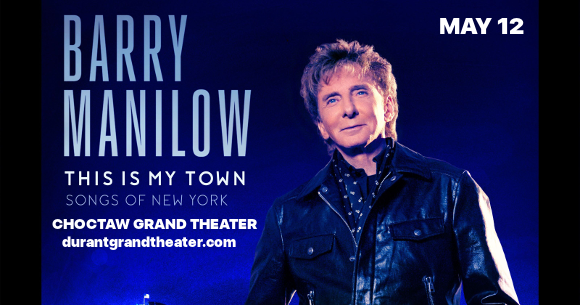 Barry Manilow is a rare thing; a master of all trades. He has excelled in almost every area of the music industry, including composing, songwriting, arrangement and production, writing for musicals, films and commercials, and producing and arranging for other artists including Dionne Warwick and Bette Midler. His prolific and widespread talents earned him an induction into the Songwriter’s Hall of Fame. Of his 47 Top 40 singles, 12 peaked at number one with 27 appearing in the top 10!! The Adult Contemporary chart ranks him as the top artist of all time, with Rolling Stone magazine calling him; "a giant among entertainers… the showman of our generation.” He is also one of the world’s best selling artists, with several platinum-certified albums and and over 80 million record sales worldwide.

Of the upcoming residency concerts Manilow is enthusiastic. "I'm thrilled to perform in these three exciting cities. Each are unique and hold very special memories for me.”

Don’t miss out on your chance to be a part of this very special experience – get your tickets to see Barry Manilow today!!!